I live in a house with wild animals (And I really have to pee.)

The thing that shocks them the most is the fact that I live with wild animals.

I don't mean that I have a pet rabbit that I found along the road and nursed it back to health. I mean wild animals. Ones I didn't invite in. For instance, there's a a family of rats that has burrowed a hole through the insulation in the side of the house and I can hear them hissing and scritching when I try to fall asleep at night. The kitchen is home to a shiny black crow that is happily nesting on top of my refrigerator; I guess it's kinda warm up there and offers the best vantage point. I think the most disconcerting to people, though, is the old raccoon that lives in the one tiny bathroom in my house; I keep the door closed to avoid run-ins with him because he's a bit on the terrifying side.

Most people are pretty surprised by this. I mean, I seem like a pretty average person. Nothing super remarkable about me from the outside. I work most days, run errands, sing Beyonce songs louder than most people around me would like. It's only once people start to hang around me that they realize that there is something a little off about me.

Quite a few of you were surprised to find that I even lived in your neighborhood. Some of you have even remarked that you haven't seen me around before and didn't realize that a person like me would either choose or (even be able) to live there.

I moved into the neighborhood late in the game, so my house cost a good deal more than yours even though ours are similar. Truth be told, you may think I live in the very same house: it's single story and painted white some years ago, as evidenced by the chips that reveal the pale yellow beneath it. It's got a handful of small, drafty windows and one of them overlooks the tiny strip of grass that people in cities wishfully call "front yards". Sometimes in the summer the roof leaks, but all-in-all it's not a terrible place to live.The inside has everything you'd expect from an old house like this: a living room that is awkwardly shaped by modern standards, yellowing linoleum on the floor of a kitchen that is a few decades past renovating, a boring square bedroom painted the expected off-white, and a bathroom that solves all of the problems you require out of a bathroom. Sounds pretty familiar, I'd assume.

It's funny, because people will overhear me casually mention the small forest of animals sharing my house and they'll think one of three things:

1. There is no way you live with wild animals. Oh, I do. I've lived with them for a while actually. Do you wanna come by and see? You should ask my buddy Jason: he took pictures of them the last time he came over to watch Doctor Who.

2. That must be amazing! You're like a real-life Snow White! Do blue birds braid your hair in the morning? Nooot quite. I mean, it sometimes has its inadvertant perks, like the fact that the crow takes care of any bugs that might make it into the kitchen. Considering the fact that anything with more than six legs really creeps me out, that's nice I guess?

3. That is fucking awful, why don't you move or call animal control? How do you live? I tried the whole animal control thing. Two guys just out of college came and removed the rats. They couldn't get anywhere near the raccoon to remove him (I call him Samuel L Jackson because he is a pretty bad ass dude) and the crow hid itself so well that they couldn't find it. After a week the rats were back and angry. Plus I was out $350 and had to replace some of the siding on the house. Unfortunately all of the other houses in the areas I want to live are inhabited (seriously, I am waiting on people to just die at this point so I can hope to move) so there is nowhere to move. I either live here, or I have to move pretty far away and uproot my life. That just isn't an option right now.

And "how do I live"? That's a good question. I think the most amazing thing about my situation is that not too long after moving in, I kind of... got used to it. I learned quickly to not leave food out on the counter or the crow would get it (I lost many a loaf of bread in that war, let me tell you). The rats you can mostly ignore, but it's pretty disconcerting to anyone who I'd invite to spend the night. Imagine trying to explain that one to a potential date. "So, before we, uh, go back to my place I need to tell you a thing. And I promise I'm not a serial killer. Wait, where are you going?"

And the raccoon? I basically dealt with that by quarantining it to the bathroom. Before you ask, I have no idea what it eats in there. I mean, raccoons supposedly eat everything, so I don't even want to speculate (because ew). The bathroom is the smallest room in my house and I use it the least frequently, so for the most part it's easy to ignore. I can avoid the bathroom to a certain degree: using the bathroom at work or in a restaurant before I come home, not drinking as much water once I am home. The only time I have to worry about it is when I shower. Thanks to wikipedia, I learned that raccoons are mostly nocturnal, so I only shower in the morning. The toilet, which he sleeps behind, is on the opposite wall of the shower so I can avoid close contact in general. After a few scary incidents in the shower that we don't need to go into, I decided to always have a very thick bathrobe handy for quick escapes. By this point in time he only bothers me every couple days. The awkward part is maybe what you'd expect; thanks to poor planning or the occassional visit from the period fairy, I may sometimes have to actually use the bathroom. 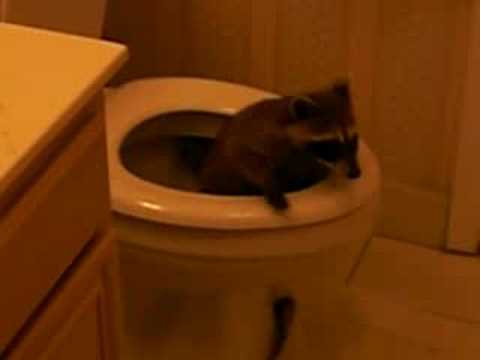 Now, if you've never tried to use a toilet in a small bathroom in the middle of the night when an angry old racoon is hiding somewhere just out of sight, it's probably hard to imagine. And if said raccoon has attacked you in the past and made you run screaming soggy and naked out of the bathroom as if you were in a horror movie, you can imagine the amount of anxiety I have about using this room in my house at all. As I'm also of the variety that has to actually sit on the toilet to use it, this creates some challenges. Let's just say that the entire process entails wearing specialized sports equipment repurposed as raccoon armor (thanks, Goodwill!). It's not pretty and it's certainly not convenient to deal with at 3am when you're woken up by a full bladder and your new bedmate wants to know why you're putting on shin guards.

You probably wouldn't want to be my roomate, but a number of acquaintances have definitely used my house as a fantasy tourist destination just so they have a shocking story to tell their friends. I've been unlucky enough to be around when they are doing a dramatic retelling of some random story I've told them and made it into something particularly dangeresque. I won't lie, I kind of cringe. My life has become some sort of weird oddity that people want all of the gory details on, but at the same time they'd never venture a foot in my house.

Not only that, but the people who are my direct neighbors have actually called the city to try to have my house condemned because they think I enjoy living with potentially rabies-infected animals and are giving the neighborhood a bad name. I've tried to reason with them a number of times. I've told them that there's not anything I can do about it. Trust me, I've tried. I've explained that having me thrown out of the neighborhood would mean that no one would shovel all of the sidewalks they conveniently "forget" to shovel before they go into work in the winter. I remind them that not only would I have nowhere to live, but their property values would decrease if a condemned house sat, slowly rotting on a lot in the center of their neighborhood. And you know, I kind of like living in this neighborhood. I've been here long enough that I don't know where I'd even want to go.

The past few months I've been struggling with how to relate the situation that marginalized people in tech live with every day to people in the dominant majority. I realized that a winding story of Carroll-esque proportions may fit the bill.

My goal has always been to educate and to create empathy; the more people who recognize what is going on, the more people we will have to fight against this problem. The way that many of us go through life every day in this industry is not what we chose, but what we have to deal with and struggle to overcome. They aren't always heinous roadblocks, but they definitely make our lives more difficult in a lot of ways.

For those of you who didn't have to do any literary criticism in high school, here are some Clif's Notes:

As a privileged person, can you have wild animals in your house? Certainly, but the chances of such are far less likely. This is the difference between building a house and an animal happening to wander in and a house being built where the walls enclose Bambi's neighborhood. Most marginalized people know that they will have to deal with wild animals and find creative ways to work around them, but many eventually realize they can't deal with living with that kind of stress and move to a place with hopefully fewer creatures.

95% of funding for my over 1500hrs community work per year - including this and other free online resources, AlterConf, and Fund Club - comes from donations.

Ashe Dryden is a programmer, diversity advocate and consultant, prolific writer, speaker, creator of AlterConf, and co-founder of Fund Club. She's one of the foremost experts on diversity in the tech industry. Ashe is currently writing two books: The Diverse Team and The Inclusive Event. Her work has been featured in the New York Times, Scientific American, Slate, The Nation, Wired, NPR, Bitch Magazine, and more.